MINURSO parade in honour of the newly-appointed SRSG

MINURSO parade in honour of the newly-appointed SRSG

Laayoune, 4 November, 2021 - Today, MINURSO held a military parade in honour of the newly appointed SRSG and Head of Mission, Alexander Ivanko. Mr. Ivanko was appointed SRSG and Head of Mission by the United Nations Secretary-General on 27 August 2021. However, because of restrictions due to the pandemic, the parade had to be postponed by two months.

The Force Commander, Maj.-General Zia Ur Rehman, welcomed the SRSG and stressed the importance of the work the Mission was doing. In his remarks, the SRSG saluted the efforts of the UN Military Observers “during these challenging times.” He pointed out that “after the breakdown of the ceasefire last November, your job became even more difficult with numerous obstacles put in front of us that we together try to overcome.” The parade was attended by both MINURSO military and civilian personnel 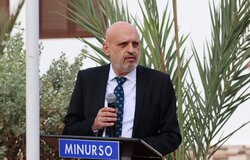