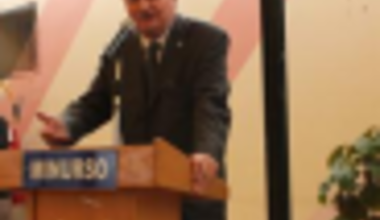 Ladsous attended a town-hall meeting with all the Mission staff. During his address, the Under-Secretary-General expressed the appreciation and the gratitude of the United Nations to the MINURSO military and police personnel, civilian staff and UNVs. The USG hailed the sense of duty and esprit de corps of the staff in serving the noble cause of peace in a difficult operational environment.

In the Moroccan capital the UN official, accompanied by the SRSG Wolfgang Weisbrod-Weber, had a meeting with Youssef Amrani, Minister Delegate of Foreign Affairs and Nasser Burita, the Secretary-General of the Ministry of Foreign Affairs. Later, the UN officials were received by the Minister of Interior Mohand Laenser and the Charki Draiss, Minister Delegate of Interior. The Moroccan Coordinator with MINURSO, Governor El Arbi Mrabet, was present at the meetings.

During the meeting MINURSO's activities and mandate were discussed, as was the cooperation between Morocco and MINURO, including in security. The interlocutors also exchanged views on regional developments.